Pizza Ovens Web participates in various affiliate programs, which means we may get paid commissions on certain products purchased through  links in our blog.

Why is pizza so calorie dense? – 5 easy ways to slash pizza calories

With that said, pizza may not always be the healthiest dish on your diet. A single slice of pizza can have upwards of 300 calories, and that’s not even including toppings!

Now you are probably wondering, why is pizza so calorie dense? Is it the cheese? The dough? The sauce?

Well, let me tell you a secret, a lot of people get this question wrong. They think that only fast-food pizzas that taste greasy are actually packed with calories.

Unfortunately, that is not quite the case.

Even homemade pizzas that contain the freshest ingredients on the market can be packed with calories.

So, what can you do about it?

Well, if you are looking to find out why pizza is so high in calories, you got to the right place.

I’ll walk you through the reasons behind pizza’s calorie density and I’ll share some great tips to help slash those calories without sacrificing taste.

After all, pizza is one of our favorite foods and we should be able to enjoy it without feeling guilty afterward.

1. What makes pizza so calorie-dense?

Pizza is calorie-dense for a variety of reasons. Let’s take a closer look at each one.

When people think of dough, they tend to think of something light and fluffy. However, in reality, pizza dough has a significant amount of calories.

Pizza dough is made with flour, water, salt, and yeast. Flour is the primary ingredient and it’s packed with carbohydrates. In fact, one cup of flour has around 450 calories!

But that’s not all of it.

Some types of fast-food pizzas or pre-bought doughs contain high amounts of sugar and other oils, all of which can quickly add up in calories.

To most of us, the sauce seems innocent when it comes to its calorie count of it. It is made mostly from tomatoes; how bad can it possibly be?

Turns out, the sauce can actually be pretty high in calories too.

Pre-made tomato sauces often have added sugars which can up the calorie count significantly.

In addition, many homemade pizza-sauce recipes call for a generous amount of olive oil. While olive oil can be a healthy fat, it is still calorie dense. Just 1 tablespoon of olive oil has 120 calories.

Cheese is one of the fundamental components of a pizza – without it, a pizza cannot be a pizza.

With that said, cheese is known as one of the most caloric foods out there. One study even found that cheese is the number one food that people gain weight from.

This is because cheese is packed with saturated fat and sodium. In fact, 100 grams of cheese has around 400 calories and 16 grams of saturated fat.

That means, depending on the type of cheese used, a single slice could have over 150 calories just from the cheese alone!

All these factors can quickly add up, making cheese one of the biggest contributors to pizza’s high-calorie count.

If you thought that cheese was bad, just wait until you hear about the additional toppings.

Nowadays, it seems like there are endless topping options for pizza. From the classic pepperoni to more unique toppings like chicken and pineapple, the possibilities are endless.

However, adding topping to your pizza can quickly add up in calories. For example, 100 grams of pepperoni has around 400 calories. That means, if you were to add just half a cup of pepperoni to your pizza, you would be adding 200 additional calories!

The same goes for other popular toppings like sausage, chicken, ham, and even vegetables.

2. 5 easy tips to reduce the amount of calories in your pizza

As dough takes the biggest slice of the pie when it comes to calories, you will want to do everything you can to cut down those numbers.

To do that, there are a few things you can do:

Thin crust pizza is a great way to reduce the overall calorie count. A regular dough ball will usually weigh anywhere between 250 to 300 grams, but a thin crust pizza will only use half of that amount.

This means that you are cutting the dough calories by half!

And for those of you that are afraid to give up the taste, don’t worry. Thin crust pizza is just as delicious as the other types (and even better if you ask me). 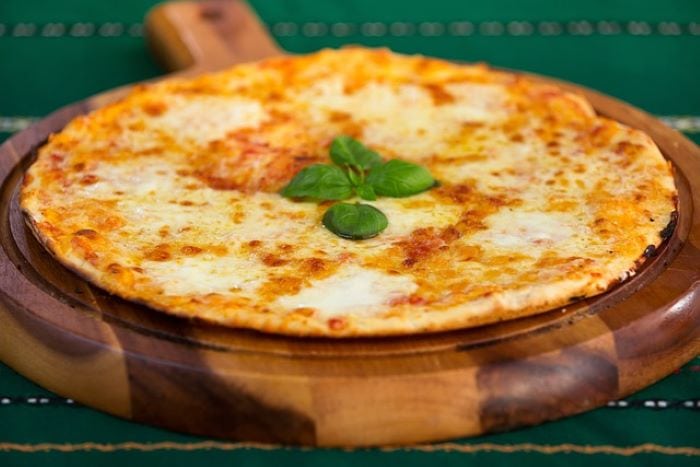 If you ask me, the simpler the pizza is, the better it tastes. But not all of us think the same.

There are some recipes out there that are far from keeping pizza simple. They tell you to add too much sugar to the sauce, unnecessary amounts of oil to the dough, etc.

If you use the right ingredients, you will need nothing more than tomatoes, a bit of olive oil, and some basil for the sauce.

The same goes for the dough, all you need is flour, water, yeast, and a pinch of salt.

By using a minimal amount of calorie-packed ingredients such as sugar, salt, and oil, you will be able to cut some of those spare calories.

Mozzarella cheese is definitely the best cheese to use on your pizza if you are looking to cut down on calories.

Compared to other cheeses, mozzarella has a lower fat content which means it is also lower in calories. In fact, by switching to mozzarella, you could cut down the cheese calories by 30%!

I know, I know. Sometimes we just crave a greasy slice of pizza from a local pizzeria.

Unfortunately, if you are looking to enjoy pizza without all the calories, you should try to avoid these low-quality places.

But don’t get me wrong, not all pizzerias are like that. In some of them, you’ll be able to find “homemade” pizza, made from the freshest ingredients out there.

So, to reduce the amount of calories, you should try doing one out of two things:

The last tip I have for you is to try making sourdough pizza.

Sourdough is known as one of the healthiest bread types out there and for some good reasons.

Not only does it has a lower calorie count, but it is also easier to digest and has a lower glycaemic index.

This means that sourdough pizza is a great option for those of you that are looking for a healthier alternative to regular calorie-dense pizza.

How many calories does a slice of pizza have?

Giving an exact answer to this question can be a bit tricky as it will be a bit too generic.

It really depends on the type of pizza you are eating, the toppings, and even the size of the slice.

is pizza high in carbs?

Pizza is definitely high in carbs. A single slice of pizza can have around 30 grams of carbs, which is more than what you would find in a slice of bread.

Therefore, it is important to be mindful of how much pizza you are eating if you are trying to watch your carb intake.

Is pizza high in saturated fat?

Pizza is not necessarily high in saturated fat, but it can be if you pile on the toppings.

For example, adding sausage or pepperoni to your pizza will increase the saturated fat content.

On the other hand, if you stick to a simple mozzarella-cheese pizza, the saturated fat content will be relatively low.